Can I hire a car in Cuba?

Yes, hiring a car in Cuba is an excellent way of seeing the more remote parts of Cuba. Though don’t expect the big plays like Dollar Rent A Car or Hertz. Car hire companies tend to be local Cuban companies so expect some paperwork! Pre-booking before arriving in Cuba is pretty much a must with most companies in the UK only booking the car hire as part of a complete holiday package.
A few points worth remembering when hiring a car...
Roads are pretty good in most of the country, but as the East is less developed some of the roads in this area can be a bit bumpy. It is more likely you’ll get stuck behind a donkey rather than another car, so progress can be slow occasionally! I found the traffic in Havana reasonably busy but once you’ve made it to the main ring road out of the city things came down a bit! Petrol stations aren’t as common as in the UK, so fill up when you see one!
Cars in Cuba tend to be modern and various sizes and types available ranging from small compacts to people carriers. Unfortunately you won’t easily be able to rent a big old American beast as these tend to be privately owned and also pretty much on their last legs, not sure they’d get you to your destination to be honest! You can however book an hour or two in one of these style of cars in places like Havana, though don’t necessarily expect a seat belt! 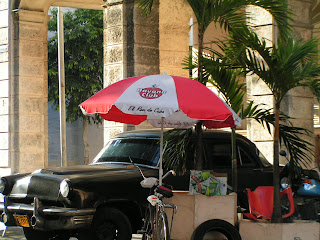 As with hiring a car in most countries you will need to arrange insurance and pay a deposit locally. There may also be a drop off fee if you are picking the car up in one part of the island and dropping it back in another. Also standard stuff applies like needing an international driving licence.
Hiring a car in Cuba, as opposed to fixed transfers for instance opens Cuba up and one of my favourite holidays would be starting with a few nights in Havana, pick up the car and visit Pinar del Rio in the West and the area around Trinidad in Central Cuba, finishing with a few nights on the beach in Varadero. You’ll see the highlights but won’t spend all your time in the car! Also there’s loads to see along the way and with a car you can stop when you like. Oh, I personally wouldn’t drive at night, especially log distance, as there aren’t many street lights!

Hiring a car is a FAB way to see Cuba, enjoy!
Karen
Escape Worldwide
We Know, We’ve Been, Just Call!
http://www.escapeworldwide.co.uk
Posted by Escape Worldwide Blog at 16:33 No comments:

Where is the best place to see Orang-utans?

Having just returned from an amazing time in Borneo, I found that that there were so many individual experiences you could choose from. But one particular question that is often asked by potential visitors is where is the best place to see Orang-utans?
I actually got to see the Orang-utans twice whilst in Borneo. The first being in the more commonly known Sepilok. The Sepilok Orang-utan Rehabilitation Centre was a moving experience. After chatting to some of the Rangers within the centre, I was warned not to be disappointed if I didn’t see any as this would actually be a good thing. The Orang-utans are trained in order to return back into the Jungle, but are still fed by the Rangers if they are not quite ready to fend for themselves. This process can take years. 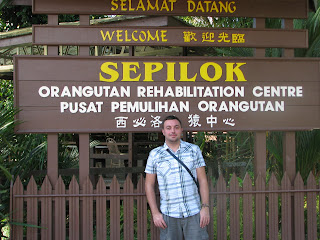 So waiting on the viewing platform, I was standing wondering would I actually see an Orang-utan in the flesh... and as feeding time came, they appeared. I had mixed reactions at this point - Firstly, it was amazing to be so close to the most ‘human like’ animal on the planet. But at the same time it reminded me of the importance of centres like this and the amount of work that still needs to be done.
My second experience of seeing Orang-utans was actually at the hotel I was staying at in Kota Kinabalu - The Rasa Ria. A popular feature of the Rasa Ria is the Orangutan Sanctuary set within the resort. Guests can see Orangutans at feeding times which is a great opportunity to get up close without even leaving your hotel! The ranger even brought over one of the newest additions to the sanctuary - Baby Ten Ten who is one of the many Orangutans who was being kept as a pet but was saved and is now being rehabilitated to go back into the wild. Many will even go onto Sepilok as the next stage of their rehabilitation. 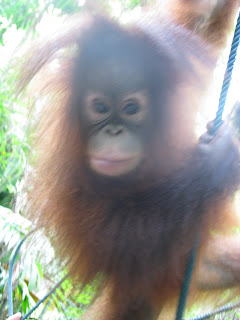 The Rasa Ria is an absolutely stunning property and great for occasions such as honeymoons, but this reason alone is enough for me to want to go back and stay there!
So I’d say go to Borneo, and to see Orang-utans, visit either Sepilok or the Shangri-La Rasa Ria in Kota Kinabalu. Sepilok would add more of a cost to your holiday but there are so many other thing to do whilst there such as seeing the Turtles and getting a taste of life in the local villages... stay for a few nights and do as much as possible! But for a more relaxed and cheaper experience, I would suggest staying at the Rasa Ria... or even do both!
Either way, it would be an unforgettable experience and a simply amazing holiday!
James
Escape Worldwide
We know, We've been, Just call!
http://www.escapeworldwide.co.uk/
Posted by Escape Worldwide Blog at 11:18 No comments: