We're having a look back at some of our favourite travels from last year - Karen headed to the USA, visiting New York, Miami and Las Vegas, on an action-packed trip. Here's a quick look at the highlights of her visit State-side . . . .

The Big Apple
​
I've been to various parts of the States before, but this was my first trip to New York - it's one of those cities that's so well known on TV and in films that you kind of feel that you know it already, so it did feel like I was on a movie set at times - or at least in an episode of Friends!

I chose to stay close to Penn station as I was taking the train to my next destination - the Wyndham New Yorker is in such a handy location, plus I love the Art Deco feel of the place. I used the hop-on hop-off buses quite a bit - what a great way to get around and to take in all the main sights - plus I took a cruise out towards the Statue of Liberty, which was fab! There's so much to see and do that you could go back time and time again and see new things, but as this was my first trip to the Big Apple there were some basics I wanted to do - the Empire State Building, Central Park and One World Trade Center were top of my list. 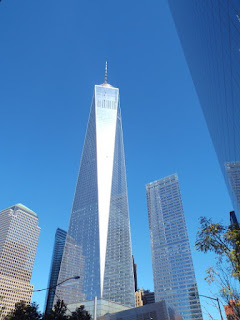 I also wanted to catch some sport and take in a bit of nightlife, but being short of time I tried to combined the two - being an avid Liverpool fan I managed to watch one of their matches at the fantastic Carragher's Bar in Midtown Manhattan, but given the time difference the match started at 8 am so the 'nightlife' aspect didn't quite work out. Still, it's beer o'clock somewhere in the world - and at least the Reds won!

Heading to Miami
​
I then took the train from New York to Miami - we book a lot of holidays with trains in the US but not normally this route as it's around 30 hours, but as I was travelling with my husband and he's a train nut, I didn't really have the choice! Thankfully it was great fun - we had a fab little cabin - and it was fascinating to see the US countryside pass by. If you're interested in travelling by train in the US just give me a call and I can tell you all about it! 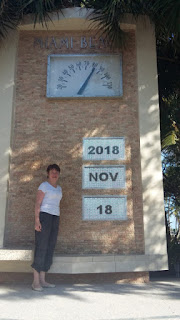 I love Miami - I hadn't expected it to be quite so entertaining! It has to be one of the best places for people-watching I've ever been to - anywhere! We spent an enjoyable few days just watching the world go by in South Beach - Miamians love to see and be seen, so we took a seat in a bar with a view and sat back to take it all in! I was lucky enough to stay at the iconic Fontainebleu Hotel, a gorgeous Art Deco property set right on the beach - it's a resort in itself so there was barely any need to leave, but with so much going on in Miami we took the opportunity to explore. It's an amazing place, and the architecture in South Beach is fabulous - a great place for a lazy day of mooching (and people-watching!)

Viva Las Vegas!
​
I also visited Las Vegas, a city that's been on my wish list for some time - and I wasn't disappointed! What an incredible place - such a buzz!  I was treated to a stay at the new-look Park MGM (if it's good enough for Lady Gaga's residency then it will suit me just fine!) and as it's in the heart of the Las Vegas Strip the location is perfect for taking in this incredible city - it really is like nowhere else I've ever been to! 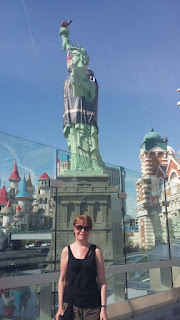 One of my highlights of my stay in Vegas was taking a hot air balloon ride over the city and Red Rock Canyon - seeing Vegas from the peaceful surrounds of a balloon was really magical, and as you drift away from the city and in to the stunning scenery close by, you start to see a different side to Nevada - Las Vegas makes a great place to start or end a driving trip through Nevada, Arizona & California, rather than just being a party town in the desert (although my big night out at Hakkasan Club at the MGM Grand was a bit on the legendary side and would have been worth the trip to Vegas on it's own!)

My USA trip finished with a helicopter flight over The Strip - what a way to finish an amazing itinerary!