Hong Kong is a great place to include in a Far East itinerary, and you can see much of it in a fairly short time - here's our guide of how to make the most of a short trip to this fascinating destination!

DAY 1 - MORNING
The best way to get your bearings in Hong Kong is on the Star Ferry, so wherever you're staying get yourself to the ferry pier and catch a ferry across Victoria Harbour - probably the most spectacular ferry Star Ferry arriving at the Central Piercrossing in the world, and at just a few pence it's a bargain too! Before you board, though, get yourself an Octopus card for reduced price travel throughout the city. If you end up on Hong Kong Island take the walkway from the pier towards to the mid levels escalators, a series of escalators that take you up the side of the hill, passing through daily life in the process. Nearby, catch the 120-year old tram to Victoria Peak, Hong Kong's highest point, from where you can look down on the rest of the territory - the cooler temperatures are refreshing too!

AFTERNOON
From the Peak head down to the old district of Western, close to the modern city centre but surprisingly ramshackled and traditional in feel. This is a great area for lunch Chinese-style, as the district is packed with great restaurants. After lunch explore the streets on foot - Bonham Strand is the centre of Ginseng trading while Ko Shing Street is home to numerous Chinese herbalists. Shops along Des Voeux Road are packed with dried fish that give quite a pungent smell! From here hop on a tram back towards Central, the modern heart of Hong Kong - the trams have been rattling along Hong Kong Island for over 100 years, and the fare is less than 20p! Get off at Statue Square and you're surrounded by Hong Kong's most important buildings, including the Bank of China Building and the HQ of the Hong Kong and Shanghai Bank. 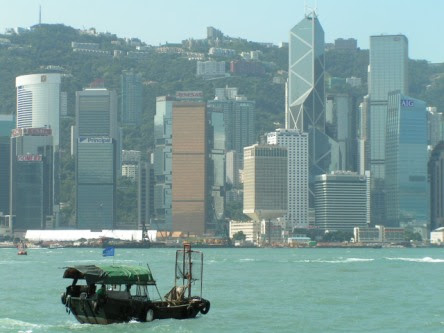 EVENING
Head back to your hotel for a dip in the pool, heading out again in Symphony of Lights from the Kowloon Waterfront time for the Symphony of Lights, a spectacular light show that takes in many of the harbours tallest buildings. The show kicks off at 8pm, with the Avenue Of Stars promenade at the Kowloon waterfront being one of the best vantage points. From here head up Nathan Road and turn right at the Mira Hotel into Knutsford Road - take the turning for Knutsford Terrace, a small road crammed full with lively bars and excellent restaurants. Look out for Happy Hours to keep costs down!

DAY 2 - MORNING
Wong Tai Sin Temple, Kowloon catch the MTR to Wong Tai Sin in Kowloon, home of the Wong Tai Sin Temple, a large and colourful temple where you're likely to be the only foreigner amongst the 3 million devotees that visit each year. From here, continue by MTR to Mongkok station, from where it's a short walk to various markets dedicated to different trades - the goldfish market, flower market and bird market are particularly colourful, while ladies market is great for bargain womenswear as well as electricals, watches and a myriad of things you didn't know you needed.

AFTERNOON
You'll now be in Nathan Road, Kowloon's premier shopping district, a great place to grab a quick lunch. Jump in a taxi and head to the ICC, Kowloon's tallest building (the 4th tallest in
The view from the Sky100 observation deck at the ICC, Kowloon the world) located at Kowloon Station - the Sky100 observation deck on the 100th floor gives spectacular views across Kowloon and Hong Kong Island, so you can pick out all the places you've seen over the last two days! From here continue to the waterfront and stroll along the Avenue of Stars, which runs along the Kowloon promenade with superb views of the harbour.

EVENING
Tonight head over to Temple Street Market to pick up some souvenirs before finishing off your trip to Hong Kong with dinner and drinks in Lan Kwai Fong, Hong Kong's trendiest area for bars and restaurants. Start in Wing Wah Lane for food before heading to Lan Kwai Fong itself, where you're never more than 10 paces from.

We have some amazing holidays to Hong Kong and beyond - http://www.escapeworldwide.co.uk/far_east/hong_kong_holidays.html