Firstly Happy Easter everyone! So what you planning to do with all the extra days off? How about planning your holiday. The following are some great ideas to get you started:

A couple of my favourites:

A real favourite of mine, the Taj Exotica is one of the most beautiful resorts in the Maldives, and our offer includes two free nights and complimentary airport lounges.

I've stayted at the Taj Exotica and it is simply stunning!

Flying from Heathrow on the 19th June, staying 7 nights on a bed and breakfast basis at the 5* Taj Exotica from only £1789 per person.

A superb hotel set on a gorgeous beach, complete with it's own Orang Utan sanctuary!


Flying from Heathrow on the 30th May and staying from 7 nights at the 5* Shangri La Rasa Ria on a room only basis from only £899 per person!

More great holidays to Borneo can be found at : http://www.escapeworldwide.co.uk/asia/destin/Mbor.shtml

We have plenty of other great holdiays so give us a call today or visit us at http://www.escapeworldwide.co.uk/.

On our newsletter this week we focused on triple centre holidays, check it out:

Again Escape Worldwide staff have visited the places featured and a couple of my favourites have to be:

Explore one of our favourite destinations - start in cultural Kandy before continuing to the historical areas around Sigiriya. Finally, hit the beach for some relaxation. Why not include your own Private Car + Driver for only an extra £58 per person! 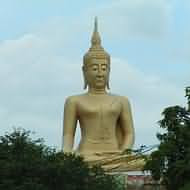 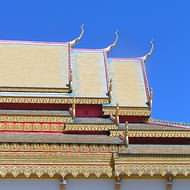 A great mix of lively and relaxing - vibrant Bangkok, lively Pattaya and the peaceful beaches of north Phuket, all in one amazing trip. This really is a 'something for everyone' trip, plus there's a half day tour of Phuket included too.

We have plenty of other great holiday ideas, and remember, We've Been, We Know, Just Call!

A photo trip around the Maldives with Escape Worldwide

Here at Escape Worldwide we love the Maldives and have all visited the place a number of times. Check out our photo tour around this stunning destination! We've taken all the photo's, yep it's a hard job!

Check out how you to can visit paradise: http://www.indianoceanescapes.co.uk/

On a recent flight, Darren got a bit bored and wrote the following blog:

'Sitting on the way to Rio, killing time, I started to look back at the different airlines I had flown with and started to think, what makes a good airline. Is it the seat pitch, the food, the cabin crew, the in-flight entertainment? Personally a bit of all of these!

Take the airline I am flying with at the time of writing this blog, on paper the seat pitch isn't great, only 31”, the food was OK, and the movies Ok, though a little dated and no movie on demand, which I am beginning to realise is a big plus! No the flight is pleasant largely due to the cabin crew. The jolly Scot who seems only to happy to constantly give me drinks and the smiley steward who seems to be happy to be in the job. So in a nutshell, BA seems pretty OK!

So is it just the cabin crew that make for a good flight? Umh, not always, take a Malaysian flight I was on, for example the seat pitch great, movies on demand, food good, cabin crew efficient and friendly so why didn't I enjoy the flight, yep the person next to me who refused to sleep on the night flight and spent the whole 12 hours jumping up and down and generally fidgeting.

So it's either the cabin crew or passengers that can make or break a flights.....well no! Take a Sri Lankan flight I was on. Cabin crew pleasant enough, food OK (notice food is never great on any of them...) and the customers seem ok, but boy how NAF was the in-flight entertainment. After 3 separate pairs of headphones that didn't work, then the screen had to be reset, twice, I was left with a couple of old films to choose from on the long flights.... not good, also the cabin was so hot and they couldn’t seem to do anything about it. But this is no reflection on Sri Lankan, one of the most relaxed enjoyable flights I had was with them a year or so earlier, so was only to pleased to travel with them again!

So I have come to the conclusion that I don't have a preferred airline as there are some many variable factors to take into account you just can't guarantee that just because you had a good flight with that airline before that you will next time..... personally I won't pay extra to fly with a specific one. Besides it's it all part of the travel experience!'

Close encounters with cheetah whilst on Safari in Kenya

On a safari in Kenya, Mark had a very memorable encounter:
'It’s an early start this morning for a game drive from our home on the Masai Mara, the Mara Serena. After a quick coffee we’re leaving the lodge at 6am, but it’s not long before the excitement starts. Within a few miles of the lodge we’ve already seen a herd of around 30 elephants crossing the plains, and a pack of the somewhat ungainly looking bat-eared foxes, but we’ve just spent the last few minutes watching a cheetah with two cubs, and we’re the only people for miles around! 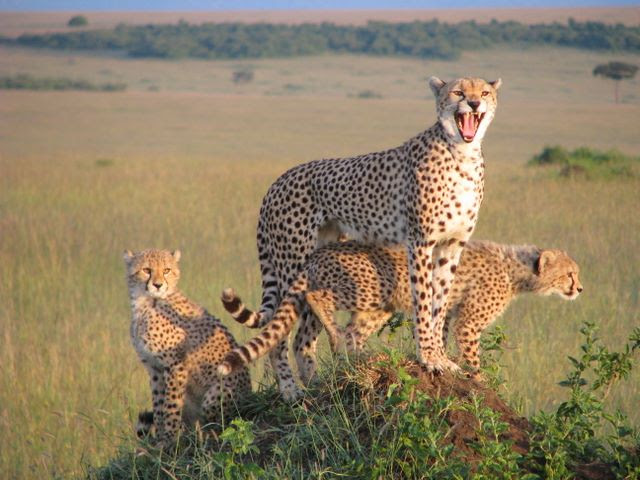 The cheetah is perched on a small hillock with the cubs, using the raised ground as a vantage point as the sun comes up over the Mara. After a few minutes of us staring at her, and her assessing us, the cheetah comes down from the hillock and heads in our direction. She decides to use our vehicle as a lookout, and jumps on the spare tyre on the back to get a better view of the area, popping her head over the roof of the vehicle – we’re all pinned to our seats in awe, but the driver seems quite relaxed. He tells us that this kind of thing happens some time, although it’s only once the cheetah has gone that he admits it’s never happened to him before! 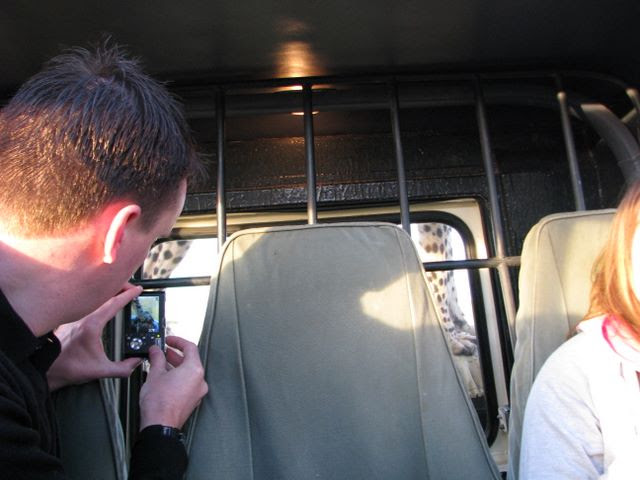 On the way back to the lodge we stop at the Mara River for a few minutes to watch a herd of hippopotamus making their way upstream. We can’t tell if they’re playing or fighting with each other, but their noises sound distinctly like laughter. Just a few hundred yards away, a pack of lions are relaxing in the morning sun having tucked in to last nights kill. It’s only when we get closer are we able to tell that their kill is a baby hippo – perhaps the pack of hippos weren’t laughing after all.'

Sounds amazing.....you to can experience memories of a lifetime on a safari in Kenya see our website, http://www.safariescapes.co.uk/ for some great safari holiday ideas.

Whenever we visit a destination we always like to explore local places to eat & drink, so when Darren & Mark were in Hua Hin, they turned this in to a ‘pub crawl’ of the town centre!

“Hua Hin is a great place for trying local Thai food, and combined with a good selection of places for a cool beer, it makes an ideal pub crawl location – everything in the town centre is fairly close together, so it’s easy to try various locations without having to walk too far!

We started at the Hilton Hua Hin, one of our favourite hotels in the town as it’s so handy for the beach and the town’s restaurants and bars, yet still maintains a lovely atmosphere. The bar at the front of the hotel is a great place for a spot of people-watching, and we started the day with a Tiger beer – they also have a range of Thai beers, but Tiger seemed like a good starting point!

From here we headed along to where the fishing boats drop their catch off, which to be honest didn’t smell particularly pleasant, but we spotted a pub nearby serving seafood, so headed for it – even if it was a traditional English pub! Not quite what we had in mind for our traditional Thai pub crawl, but the deep fried squid was superb.

Next stop was a café bar that we first visited about 10 years ago, and it hasn’t changed at all – Monsoon’s is close to the beach and serves fantastic cakes, but we were getting back in to the Thai way of doing things, so we had two Singha beers and a plate of fantastic spring rolls. It was a good job we’d headed indoors at the heavens soon opened, but there’s something typically tropical about drinking beer as the rain pours down – quite fantastic! 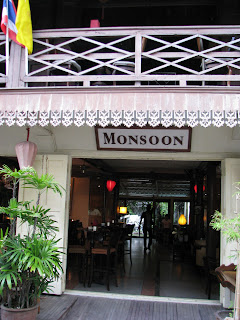 Then we were back to the seafront, to one of the wonderfully rustic restaurants that’s built on the piers over the beach – Thai fishcakes and my favourite, deep-fried prawn balls, washed down with a large bottle of Beer Lao – again, not Thai, but one of the best beers in the Far East (although we don’t normally need an excuse to drink any beers in the Far East!)

We then walked along the beach, past the Hilton Hua Hin and the Sofitel Centara Grand, to one of the small beach shacks that serves simple Thai food with cold drinks – two plates of Phad Thai and two Beer Chang and we happily relaxed on the beach and watched the world go by for a while.

Last stop on our pub crawl of Hua Hin was at the night market, which is one of the more Thai night markets you’re likely to come across – all the visitors seemed to be Thai tourists from Bangkok, and the food here matched the authenticity of the venue. Our final snack was from one of the stalls on the market and was of Satay, which they do particularly well in Thailand despite it being more of a Malay dish, but when it’s washed down with another Singha beer, you can’t go wrong!”